There are a lot of times during hearings in the Esar Met case when lawyers and judges whispered, in order to hide material from the public

This page will provide some of those whisper clips, and their context.

a) First, the context, at the beginning of a hearing, a very long audio clip, 19 minutes+.

b) Now one of the two audible whisper sessions which occurred during that hearing, ~ 2 minutes.

The 'confession' interview needed to be suppressed in order to prosecute Esar Met, as opposed to prosecuting the real killer, but a big problem was the optics of how the defense could be made to cooperate with that suppression in a believable way. Normally anybody knowing the content of the 'confession would say that the defense would use the confession to show that Esar Met knew nothing about the crime. That though would prevent prosecution and expose law enforcement misconduct.

The solution was to get the defense to initiate the suppression, in other words for the defense to go on the record saying that they, defense counsel, did not want the interview to be entered as evidence for 'some reason'.

This was done fairly smoothly at the hearing, as can be heard in the longer clip above, but the people involved, the judge, defense and prosecutor, made huge mistakes in their deception later on.

That all happens to be completely true, but irrelevant.

The prosecutor's position, again 'ruse' would be more accurate, was that the 'coercion' was not initiated by authorities but by the translator.

Remember, the interview clearly shows Esar Met did not know any significant true facts about the killing, aside from what the FBI agent told him through the translator.

So the arguments the two are having are utterly irrelevant.

They have compelling evidence that he is not guilty, and they are creating other distractive avenues to prevent people from being permitted to see that evidence.

Now, briefly, let's jump to the medical evidence and see if there might be problematic evidence involving injuries which preceded death, and are relevant to the suppression. Keep this gem in mind. https://tribalcash.org/images/mp3/clip1509.mp3

What does the judge want hidden?

And also item #3 from https://tribalcash.org/esar-met-hidden-evidence-4.html involving the kicks mentioned by the translator during the interview, as well as the photo to the right.

The photo shows that two impacts to her head occurred less than a foot from the ground i.e., her head was kicked at least two times.

The medical examiner testified at length about the injuries.

In fact he spent more time testifying than almost any other witness.

A few clips will be added first here.

a) The child had only one injury that bled, and that was on her head.

b) The blood on her face was dry, in fact that was the only place on her body and clothing that was dry, despite being face down in the shower with a lot of water run.

She had been kicked hard in the head at least two times, then, a long time after, when the blood on her face had dried, she was washed in the shower.

c) Throughout the trial great pains are taken to avoid using the word 'kick', even though a kick is obvious.

Here is a highlighted copy and paste of item #3 from the Hidden Evidence #4 page.

It's already been mentioned that in the more professional of the two interview transcripts the person translating for the police has knowledge about the body being kicked.

But two transcripts were done for this website. That 'better English' transcript, above, was done by a well educated Burmese woman who worked as a translator, but was from a different ethnic group than those involved.

The second transcript https://pastebin.com/rQHFW5rq is in rougher English but it is by a person who understood better the dialect and was able to hear things the more professional transcript translator might not have heard or understood in the specific cultural context of Esar Met's language background.

In this second transcript, the police translator mentions the kick, first, at the very beginning of the interview

line 123 "The body of the child with the footprint of your leg and blooded blood from you kick was found in your bath room",

then again on line 483 "They knew a black mark on the child body from leg kick. Not with leg heel but Mark of exact arch of foot kick. It has been already examined with doctor",

then again on line 653 "Then, you kicked her head hit to the wall."

One of the oddities at trial involved the testimony by the medical examiner about injuries which caused blood, there were only a few specific injuries which led to blood loss, the other injuries involved internal organ damage. 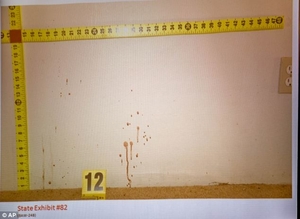 There is a very clear photograph of two blood spatter stains on the wall, near ground level.

For some reason, all sides at trial refrained from commenting on how specifically those injuries occurred, but clearly they appear to have been from kicks.

This utterly contradicts the false confession, of course.

So if either the defense or prosecution had mentioned that at trial, and then if Esar Met had a change of heart and disobeyed his lawyer and demanded to speak, as he had done with his 'outburst' at a previous hearing, then it would have been misconduct by the lawyers to not have raised the issue of the translator mysteriously making all these references to the body having been kicked.

The judge tried to wiggle around future judicial misconduct possibilities by further narrowing the scope of how the interview could be used, but clearly all parties were greatly relieved that the defense counsel kept Esar Met from testifying.