Obviously corporate entities, which own more than 5% of bitcoin, are going to sell their massive stake when they can do so profitably enough for themselves, or when they believe they made a mistake with company funds.

The bitcoin they bought was not intended to buy office supplies or pay bills, it was for speculation. Large bitcoin investors know that, and they know that once the dump comes it will be historic. They also know the bitcoin scam has gone on quite a while and there is no end clearly in sight yet.

There was a time to buy bitcoin, and it isn’t now.

Bitcoin has pumped pretty high, as of early December 2020, but there are a few longterm negative pressures on it.

1) It was initially started as a sort of pumpndump, issuing lots of coins quickly, to a few people, and thus incentivizing those people to pump it.

The irony is that anybody can look at the blockchain and see that, but people who were incentivized, i.e., the miners who got lots of bitcoin when the pumpndump was at the ‘incentive’ phase, claim the opposite of what is obviously true, and millions of people ignore their own common sense to believe the pump crew.

If you don’t understand, research how many bitcoin were created each year. You will see that bitcoin initially created a high number of coins at the beginning, when only a few people knew about it. Then started creating less and less once it gained popularity. It’s the exact opposite of what a legitimate currency would do, and the exact opposite of what bitcoin promoters claim.

50% of all bitcoin that will ever exist were distributed to a small number of people in the first four years, long before its existence became widely known to the general non coding public. A real currency would not do that, it would distribute a few coins at the beginning, then more coins as more people joined that economy. https://www.theverge.com/2012/11/28/3701434/total-number-of-bitcoins-hits-10-5-million-production-halves-to-stop

Imagine if, when the U.S. dollar was created, circa 1792, 50% of all the dollars that would ever exist were distributed to a few people. Then those people were told that they could become fantastically rich by simply promoting the dollar. Then, suppose they started trying to convince people that it was a super fair currency that offered freedom, etc. Somehow, bitcoin is getting away with that scam.

Strangely, the U.S. government has helped pump bitcoin at every step.

2) A few years ago there was some criticism of Tether for pumping bitcoin using the leverage of a stablecoin which was paired with bitcoin on a lot of exchanges. They could create an artificial massive demand then trickle out bitcoin at a higher price, or buy at a lower price, to enable the pump. It was basically just corporate pillaging, completely legal, most companies do it to the extent they can get away with it, even if it is predatory.

Now that strategy is going mainstream. A company called Greyscale has figured out another way to do the same kind of leveraged pump, using diluted bitcoin and other currencies, to issue stock, then adjusting the dilution based on various factors. It’s like Tether on steroids, but a more respectable company, so it won’t get criticized so easily. It has ‘legitimacy’ and official cover for its actions.

In this article https://news.bitcoin.com/angry-peter-schiff-lays-into-grayscale-and-cnbc-claims-conspiracy-to-pump-btc-value/ a popular gold enthusiast sort of points out part of what Greyscale is doing, he’s simply stating some facts, but the news website treats the facts like they are silly. It’s a strange phenomenon, to see large numbers of people who refuse to see the truth because they believe they are part of a group that has overpowered facts and doesn’t need them anymore.

As more and more investors pile into funds like Greyscale, https://news.bitcoin.com/guggenheim-investment-fund-to-invest-497-million-in-grayscales-gbtc-seeking-bitcoin-exposure/ , those funds can absorb more and more of the bitcoin ‘float’, until the actual number available for trading, the ‘real’ float, becomes lower and lower, and they control the price. When there are several such funds, they eventually collaborate discreetly and instinctively, a natural business phenomenon, and become effectively a government controlling a new currency.

The scam can go on almost indefinitely since the funds are always on the winning side of the trade, they can always pile the losses onto investors. When the premium is high they can issue more shares and buy bitcoin, feeding a pump, when it drops they can sell bitcoin and buy back shares until the price starts to go up.

At this point, it’s obvious that there is some kind of organized effort being made to influence corporate types to hop aboard the sinking ship.

In this case, if bitcoin is a government issued currency, i.e., if it was ultimately created and issued by employees of a government for their specific purposes, they can adjust the price at any moment to reflect some policy objective. Historically, government employees typically hide behind benevolent motives, they create a plausible explanation for their actions which paints them as having some good motive, an explanation which lower level employees can temporarily take shelter in, but ultimately it is usually gang motives, politics, which rules projects like this.

3) Bitcoin, like most digital currencies, does nothing. It’s like a bicycle without tires. People can play with it, and talk about their amazing bicycle, but it gets kind of silly and won’t take them far. There are other more extravagant frauds in the crypto world, like Ethereum, which does almost nothing, except lure other non productive projects onto its chain to capitalize itself. And Ripple, which also does nothing, but does it in a scammier way. Eventually real coins will produce value, data and other things, and there will be no use for pumpndump type coins that are distributed early to pumpers and have no sound basis for value.

It’s amazing that large financial companies like JPMorgan are trying to pump bitcoin without doing the most basic research.

On the other side of the equation, though, is the solution that governments may take to the economic collapse. Already a lot of economically conservative governments are being walked into preparing for an inflation storm of some sort, even helping start it. The basic trick seems to be that digital currencies will be used to compensate for fiat inflation, like a parachute. As fiat inflates and becomes worthless, digital currencies will soak up the fiat ‘wealth’ and economies will transition to digital.

If done correctly, and with corresponding discipline in the adjusting of commodity prices, it could create ‘a world of billionaires’ where everybody has a lot of money but only a few things are affordable.

So if that happens, and some variation is virtually certain to happen, a bitcoin will be worth tens of millions of dollars, but a bag of potato chips will cost hundreds of millions. 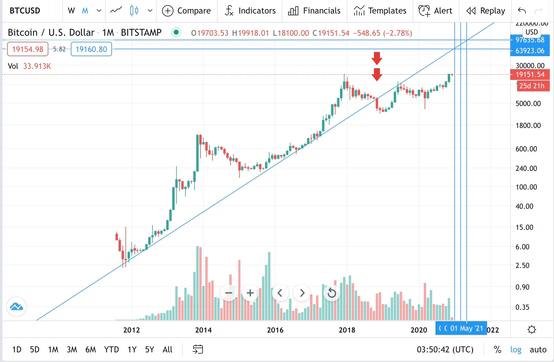 One optimistic possibility is that the same log trend line which was used by traders up to November 2018 will continue, but the price will bounce against the bottom of the line.

In this case, the ‘price’ on the chart is vs dollars here, but a person would have to look at btc vs other currencies as well.

Considering the incredibly weak fundamentals of bitcoin, the only way to maintain the trend is to inflate commodities and other things so that the btc usd chart maintains the appearance of continuity as people start understanding what the dollar value, or any other currency value, relative to bitcoin is.

If that is what will happen, i.e., bitcoin used as a parachute to limit the screams as the dollar drops, then the more interesting charts will be for fiat vs things with actual intrinsic value, like commodities.

One problem is that there is already a huge disparity between bitcoin and tangible goods, including commodities like gold.

Something has to happen to break that disparity. Either a bitcoin collapse or a massive run up in commodities.

It seems very implausible that governments / large players are not deliberately keeping the price of things like commodities down, At some point, though, something has to balance the values. So it looks like pretty soon fiat will drop across the board, which would be hidden by the increases in digital assets like bitcoin, and then, at some moment, natural economics will take over and commodities will explode upward.

The alternative is for governments to either a) dramatically reduce consumption of all commodities, which would lead to turmoil in a lot of places, or b) localize economies dramatically, including local currencies separate from commodities, with some less well off places being put into extreme poverty i.e., extreme reduction in commodity consumption.

A better choice is a quick jump to productive algorithm currencies, as described elsewhere on the website, as part of ‘b’ in the previous paragraph.