Putting a U.S. federal taskforce in charge of missing indigenous people is like putting Microsoft in charge of Apple's security.

It makes no sense whatsoever.

The U.S. depends upon the elimination of Indigenous people to grow.

The basic pattern is exactly the same as a mafia storefront.

a) Find some people who are genuinely interested in helping Apple/Indigenous/etc, and make them the public face of your operation

b) Pull their strings from behind

c) Rake in the benefits

Basic common sense /Any person or people who do not have space to survive will not survive.

This page is in the 'Archetypes' section because it is a pattern evident throughout history.

Although the U.S. government, unlike Mexico's government, has no tolerance for genuine indigenous sovereignty, it is still the only solution to issues like MMIW.

Ultimately there is no safety in a melting pot for any group of people who are unassimilated, and for those who do assimilate the danger does not disappear, it evolves.

As long as an indigenous group does not have any real territory, there is no real defense for them. Politicians will endlessly find 'solutions', but the only real solution is actual tribal sovereignty and territory, not fictional sovereignty and fictional reservations that are conditional on an ongoing assimilation success.

MMIW stands for Missing and Murdered Indigenous Women, and reflects an awareness of that issue in North America, but in fact the problem is common in every region of the world.

"Dungeons used to house female slaves at the Cape Coast Castle, one of several slave forts built along the Gold Coast in Ghana." 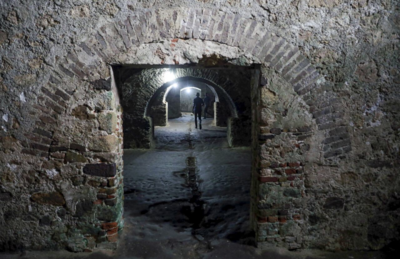 A tribal group with women and children would have been doing something somewhere in that part of Africa, farming, eating dinner, etc when they were attacked by another group that was looking for slaves.

Within a short time the men who survived were made slaves and the women were either taken as wives or slaves or both. Older children might have been made slaves but younger children presumably were left dead or to die, along with the elderly.

The women kept in the dungeon pictured were being kept by men whose motive or goal was a mixture of power and profit, so even as dungeon stays go, it would have been severe. As today, the women in these dungeons had no real outside authority that would likely rescue them.

They weren't captured by a specific race or religion or tribe, they were captured by whoever had power at the moment. Likewise many of the societies that became slaves or captured women also did the same to other groups until their fortunes shifted.

Where are the 'authorities'?

Many people recognize that 'military' and 'government' authorities seldom accomplish much against issues like MMIW, human trafficking, etc.

A conquered group will never reach 'equality' in a melting pot. The closer they come, the more discreetly they are targeted.

The FBI and Homeland Security in the United States famously are not groups you would trust human trafficking and MMIW type investigations to, unless you were the culprit and wanted the investigation to not happen. Jeffrey Epstein is a known example, only because his case was forced into the media, but there are countless much more serious examples that never made it to the media and were never investigated, for the simple reason that the FBI and/or Homeland Security were assigned to investigate them.

Some places have acknowledged this basic, cross cultural human fact.

In India some people got annoyed with the 'status quo' and forced entire 'specialized' police stations designed to handle rape victims and consisting of only women. That does not reduce the number of rapes overall, nor does it have any effect on human trafficking at higher levels, but it does allow effective legal recourse for those victims that specifically go to those police stations. More significantly, none of those women who go to those police stations are raped by male police officers, an otherwise common occurrence in many countries.

Canada is where the MMIW issue has reached public awareness mainly because Canada is more progressive at the moment than most countries.

Canada's history of boarding schools is well known, but it also has other histories.

Canada has no great poverty now nor similar issues that affect vast segments of the ruling population, so they have liberty to look after the interests of disempowered groups, including the disempowerment itself.

The United States cultivates an aggressive posture in its citizens, as a country it is always looking for some group to attack, bomb, control etc, so MMIW and similar issues are not likely to gain an easy foothold in the mainstream United States anytime soon.

Are there people or societies that do not, and would never, capture women or take slaves?

There aren't. A society can create structures that discourage abuse but the moment that society crumbles its people will revert to certain patterns. So 'violent rape' can evolve into 'capture and rape' which can evolve into 'slavery' etc.

An individual can be educated within a family to hesitate towards violence, but when society trains individuals en masse to 'act civilized' or be nonviolent the result is always a counter reaction waiting to happen. The more an external authority tries to force learning i.e., train people, the better the approaching reaction is hidden from view.

Obviously women commit their own versions of the same offenses men commit. Part of the problem in solving something like MMIW is the normal human tendency to profit from crime, even crime committed by others.

Brian Smith was a serial killer of indigenous women, raised in a family where 'the family' was a calculated integral part of the melting pot, rather than an independent entity.

"The flower-shaped De Beers wedding ring she wears was Smith's mother's, Bissland said in an exclusive interview with KTUU."

Part of the dynamic is that at the lowest level, the family and individual level, when there is a threat, those who can escape do. The wife did not need to know about the killing, that would have been an unnecessary risk, but, like anybody in the melting pot, she knew the catchphrases, the lingo, what could be spoken and conceptualized consciously and what could not. She empowered him, but in the context of a calculated relationship, a transactional melting pot relationship where responsibility was distributed according to roles, rather than shared.

Likewise, the police play a similar role. They must 'prove the melting pot is fair', but their unspoken goal is to further it. For them Brian Smith is a caught soldier who must be sacrificed to allow the bigger process to continue. They will be sincere in their 'melting pot values', just as the wife was, but they vaguely understand that their goal is to lure the indigenous holdouts further into the melting pot, to assimilate, globalize, them.

Part of the problem is that many women, like many men, tend to form ideological sides around non ideological issues, which leads the 'stronger' side to engage in punitive 'ideological' acts which are really simple cattiness and not based on actual values. An example of two women with a corresponding imbalance whose competition subtly promote this issue on ideological grounds is

Both of those women would say they are 'opposed' to domestic violence, especially its extreme versions, but each also sees that violence as a sub issue of some bigger issue in their respective worldviews.

There are many women who are actual victims of the problem but eventually there will probably be a much more visible and powerful group, men and women, who see the issue as a way to gain power, so as with everything, a person should listen but not follow.

What is the solution?

A lot of things have been tried in various societies around the world to reduce rape and violence against indigenous women living in or near a melting pot society. Aside from education that occurs in the family, the only thing that reliably protects vulnerable women from rape is a defensive ability. In some places in Asia where two societies have intersected the women carry knives and typically rape is reduced. In industrialized societies handguns would reduce the incidence of rape.

Adequate individual defense by itself is not a complete solution obviously, but if a woman wants to be safer she should rely on her ability to defend herself, rather than the ability of politicians to protect her by profiting from her vulnerability.

Alaska is #1 out of 50 states in Indigenous per capita population and #11 out of 50 in female incarceration.

New Mexico is #2 out of 50 states in Indigenous per capita population and #9 out of 50 in female incarceration.

South Dakota is #3 out of 50 states in Indigenous per capita population and #4 out of 50 in female incarceration.

Oklahoma is #4 out of 50 states in Indigenous per capita population and #1 out of 50 in female incarceration.

Montana is #5 out of 50 states in Indigenous per capita population and #7 out of 50 in female incarceration.

A melting pot is first built on widespread violence, but it is maintained through intimidation and low level violence against vulnerable people.

There are a lot of things that don't work. Here is an example.

A woman went to a bar, got drunk and may have been drugged, somebody had sex with her when she was unconscious.

Why would the solution to that series of events be for the town to give half a million dollars to the victim?

Does it solve the problem in any way whatsoever? Of course not. She lost some wages but not to that extent.

In fact it makes it worse.

1) It portrays her as having been motivated by money.

2) It suggests that a person is not responsible for their own security, and if something happens to them they are due money.

3) It lets employees of police departments and other government agencies hide behind the dollars their agencies have. It is getting common for a police officer to commit a rape or other misconduct and then the department steps in and pays money to the offended party. There are a lot of cops who have had multiple judgements against them, costing hundreds of thousands, or millions, of dollars. The police know it's public money, from taxpayers, so it is unlimited, and they're happy to pay. But it solves nothing.

That woman should have used common sense and not have gone drinking in such a way as to put herself at risk. But once it happened and she reported it there were people whose job was to follow it up, and they did not do their job.

Was she drugged? Was it part of an organized deliberate pattern? Was the offender connected to the police department? Nobody knows because the police can use money to hide their mistakes.

What is it that leads women like Patricia Spottedcrow to a life of crime? Is she an incorrigible criminal or is there some other reason she and other people in Native concentrated areas need to be jailed at an obscene rate?

Any place where two ethnic groups fight will have ongoing issues similar to MMIW until the less powerful group has a 'strong' retreat i.e., their own territory. The United States has 'reservations' which are deliberately not actually sovereign and have no 'rights to defense'.

Giving Natives actual sovereignty and status as real members of their nations, rather than shallow status as parts of a "United States authorized domestic subnation" is the best way to reduce MMIW.