Some examples of dishonest reporting that attempts to skew public opinion.

1) An article about a women being used as a pawn by various governments.

The British and U.S. governments want her to remain in 'Iranian custody'. It gives them the 'moral high ground' as long as they can spin the story their way.

Did the woman commit any serious crime? Of course not. So why would foreign powers want her to remain in Iranian custody?

a) "The latest twist in Zaghari-Ratcliffe’s case comes as Britain and Iran negotiate a long-running dispute over a debt of some 400 million pounds ($530 million) owed to Tehran by London. Before the 1979 Islamic Revolution, the late Iranian Shah Mohammad Reza Pahlavi paid the sum for Chieftain tanks that were never delivered."

Note that it is the British who are publicly connecting the two events, not the Iranians. Are the two events connected in any way? Of course. The Iranians are basically saying "We are in the right, and both of us know that, so we will quietly be gentlemen and let you behave properly i.e., return our money". The British are saying "We have enough power and influence that it doesn't matter who is right".

What would be the British motive?

Britain and the U.S. have had a strong hold on the global economy, and have for decades used their power to muscle money and resources out of less powerful countries under the guise of promoting this or that 'good' thing. In this case they are trying to implicitly say 'We, the British, should keep the Iranian money because Iran does not have the same concept of 'human rights' that we have'. Of course the Iranians could say the same thing about the British but from an Iranian perspective.

Women were not legally allowed to vote in the U.S. when World War one started. Many blacks until long after that.

If Britain or the U.S. want to focus on anybody's rights they might start at home. It is easier and smarter to shine your own shoes rather than using violence to shine your neighbor's shoes.

c) Note that her husband is keeping her daughter in Britain.

He is trying to manipulatively use the situation the same way his government is, while both pretend to be in conflict with one another over motives. 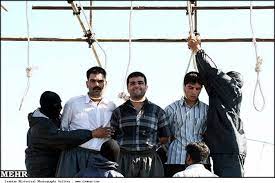 Iran is not a super democracy of course, but neither is Britain. The big difference between the two countries is that Britain has financial power and powerful allies and Iran does not. Britain has influence and wealth which lets it comfortably spin its image more effectively than Teheran.

In Iran it is overt government pressure which forces media to spin news stories in their favor, in Britain it is a more subtle pressure, i.e., less visible to Westerners.

Should Britain return money Iran paid for military hardware during the Shah's rule?

The Shah was owned, lock, stock and barrel by Britain and the U.S. https://en.wikipedia.org/wiki/1953_Iranian_coup_d%27%C3%A9tat

The arms sale in question probably was arranged as part of a backroom deal involving payoffs to British contractors. In other words it was part of the military industrial process of squeezing money out of vulnerable economies under camouflage of 'promoting democracy'. https://www.aljazeera.com/opinions/2021/5/6/rich-countries-drained-152tn-from-the-global-south-since-1960

So the money was part of the vast effort by Britain and the U.S. to subvert democracy in Iran after the coup https://en.wikipedia.org/wiki/Mohammad_Mosaddegh

Why would they have a right to keep the funds? The article tries to provide a pretext, but it fails.

Also worth pointing out that the Iranians use a woman as leverage because their priority would be the woman in a case like that, if roles were reversed. Britain's high level priority is not an Iranian born woman, even though their colonial history forces them to pretend that. In other words Britain sees itself in a win/win conflict, they keep the money and they get to portray an adversary as 'oppressing a woman', as long as they can drag it out.

The British are caught in a variety of the famous 'monkey trap' though.

They know they have 'won' because they have a solid grip on the prize.

This is the same as most overextended colonial powers at the moment. A person can only cringe and wait.

2) Law enforcement is often portrayed as having 'a few bad apples', but invariably when corruption is uncovered it involves evidence of widespread corruption followed by a coverup that involves sacrificing one or two low level cops.

"He also told how local and federal prosecutors knew for years about Handy’s crimes took no action against him, allowing him to continue to wear the badge as a detective and later a deputy sheriff."

"Butler noted that Handy is one of only two officers held to account in 201 wrongful homicide convictions since 1990 in Kentucky, Illinois and Oklahoma."

Also note that he is accused of doing the same thing the FBI agent in the Hser Ner Moo investigation did, i.e., feeding information to a suspect to make his confession more believable.

As rare as it is for a low level cop to be exposed and sentenced, it is almost impossible to hold federal agents accountable for acts like that.

When there is an exception, it always involved a less well connected federal agent, usually a minority or a person not popular with his colleagues.