As a parallel, if you had a fish tank that contained fish, algae, etc, it would always be missing more than one thing that existed in the original environment from which the fish and algae were taken. Once you found one thing that was missing you would realize it is also missing another thing, on and on. 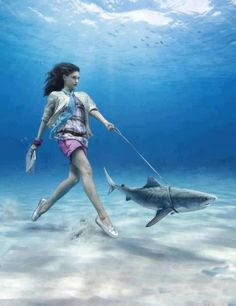 This page contains examples of how melting pot archetypes are mixed, like the symptoms of a fish tank.

Candace Owens is an excellent example of a few melting pot archetypes. She is a major public figure who has taken on the task of assimilating black people into the United States melting pot.

A person can look briefly at her positions on a number of issues and it becomes obvious first that she is young, She takes a firm stance on issues about which she is poorly informed, then uses her amazing rhetorical skills to defend her position.

Both her rare gift in using logic and the fact that she is unusually attractive make her very effective at selling an ideology. That has made her a target for talent scouts who look for 'a fresh face' for their ideology. Because she is young and naive, and because she is as attracted to power and wealth as anybody, she lets herself be used that way.

She fits well with the 'global idiot' melting pot archetype. She wants to be a cog in a machine, and the important thing to her is that she, as a cog, is on par with other cogs in that machine.

But she is also an early nouveau racist. She has nothing against nonblack people, but she takes her identity from being 'apart' from nonblacks. Because her opinions are young, ill formed, her nouveau racism has a ways to evolve, and still has not extended outside her group.

She tentatively reached outside her group to point out something along the lines of 'Hitler would have been okay if he didn't touch anything outside Germany'. She was criticized for that, but she also was correct, even if most people did not agree with her the way she stated it. If she had said "Any geographically isolated people can do whatever they want, as long as dissidents can leave easily and freely" then she would have had fewer critics.

She imagines that she is against 'the global elite', but in favor of nationalism, yet another example of her youth. It's like a kid saying "I don't like lemonade because it has sugar, I prefer soda".

The problem with her view is that as smart and gifted as she is, she simply does not know much. She has the style she needs to sell herself as an expert, but not the substance. Maybe in ten lifetimes or hundreds of years, maybe much sooner, she will figure out that there is no gang you can join to make your gang better, there is no nationalist or melting pot utopia that is just around the corner 'if only' this or that compromise can be worked out, and there is not, and should not be, a 'global family' of all humans with a single shared goal.

As always, the future belongs to tribes that can evade the melting pot, not those who surrender most profitably.

The sly melting pot tactic of walking conquered groups into surrender eventually leads to the surrenderers being portrayed as melting pot heroes, like this Native woman who tried to encourage other Natives to surrender their independence and join their conquerors society https://en.wikipedia.org/wiki/Zitkala-Sa

John T. Earnest is one of the recent mass shooters.

He is an example of the 'almost finished product' of the melting pot, a confusion of archetypes that can never be synthesized into a functioning human that operates independently.

He was very 'role focused' and had been trained for maximum success in the melting pot, something which gave him the confidence to 'act boldly' in a new role which would have provided completeness for him if he had managed to play the role adequately.

Unfortunately for his dream, as many roles as he had studied he had not really studied that of tribal warrior. He could have 'infiltrated' the melting pot war machine and learned tactics, but he was in a hurry. There are probably many upcoming shooters who are not as well rounded as him but who have the race war hero role down a little better.

In the melting pot, gambling is a sport, usually involving one's 'melting pot blood or life' which is money.

An implicit part of 'the melting pot', a necessary pre requisite for a non terminal melting pot, is that essentials not be dependent on melting pot substitutes like money, and that is not the case in any current melting pots, therefore they are all terminal.

There are many reasons why all of the current melting pots will not last, and this is one. A melting pot is based on some calculations, including the calculation that 'the needs of the assimilated' can be met using a proxy economy until they are assimilated. In other words money and the consuming economy can sustain the transition of two cultures merging. But that only works if it doesn't involve postponing its 'balance', like 'borrowing from the future' with credit cards.

To put it another way, if you have ten pounds of food and you invite nine people to eat then everybody can eat a pound of food. But if you don't have any food and your scheme is to lure nine people to some feast where everybody eats a pound, and the basis of your scheme is force, e.g. 'I have a gun, come to my feast and bring food', it won't work long term. There may always be a future payoff or success in sight, but that future payoff will get worse and worse until eventually you realize it would have been better to avoid the initial feast, the initial melting pot.

Paddock was an honest gambler, in that he backed up his gambling with his life. In that sense he had a flicker of the indigenous gambling archetype, except that a) he lived in a melting pot where money equates to life and b) he was stupid, not qualified to gamble the way he was gambling.