A list of cases from 'Unsolved Mysteries' that are probably not as unsolvable as they may seem.

He is the subject of a NetFlix series, and there is a lot of info online about the case, but there are some obvious things that are ignored. 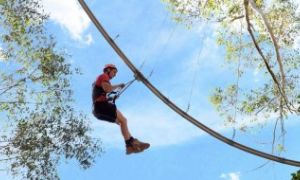 The most important clue seems to be that, 'coincidentally', three of his coworkers 'decided' to look down from a rooftop, and discovered a hole in the roof which led to the body.

Rey's friend, and boss, was a high school friend who moved in a scammy subworld of finance, and within that circle Rey was introduced to something along the lines of a fraternal order i.e., Freemasonish, which involved individuals agreeing amongst themselves to a hierarchy based on who is the best scammer.

The case would be easily solved by isolating the three people who spotted the hole in the roof, getting them in separate hotel rooms for example, then interviewing them properly.

"Hey, I'm from Unsolved Mysteries and we'll pay you to talk on our show about finding the hole in the roof."

a "Hey man, I've got a great idea for how we can initiate the new guy into our local freemason chapter."

a "Zipline, we tie off from the roof and have him zipline down to the lower roof."

b "Sounds cool, make sure you use some kind of harness though, and delete these text messages."

The important thing in this case though is that a crime was not really committed.

It isn't illegal to 'initiate' a person who wants to be initiated.

It might be 'illegal' to not render aid when you see somebody drop 40 feet and go through a metal roof, or to participate in something that causes thousands of dollars in damage to a roof, but the people involved were involved because they had money and impunity so it would be a feast for lawyers, but probably not something which should be prosecuted.

This murder is not so much easily solvable, as it is an example of the effects of a lack of accountability for police.

The show makes a pretty solid point of painting the husband as guilty.

But then they go off on tangents created by police. A supposed serial killer, actually a serial confessor, 'knows details that only the killer would know' according to police.

Where did he get those details? From the police who interviewed him. Of course the police won't admit that, so he remains a suspect despite strong evidence he was not the killer.

This is a scenario that repeats every day many times in police stations. Get a false confession, claim to have solved a crime, then no accountability for the police who cultivated and refined the false confession so it would be believable.

If there is a mechanic who constantly breaks engines, an agency will investigate.

If there is a bank that steals money, an agency will investigate.

If there is a cop who gets false confessions, his agency will promote him.

Another example of 'not an unsolved mystery', but rather 'police fail to solve something so they create a mystery', except this one in France.

A guy committed mass murder of his children then committed suicide. Police spent a lot of money looking for the body but did not find it. Film crew decides to make an episode that explains a nonsense theory about why the body was not found.

A less expensive route would be to make a map from a satellite image of all the large fallen trees in that area at the time, then walk up and down both sides with a metal detector. He probably scratched out a shallow grave alongside a fallen tree and finding the gun would lead to some traces of bones/clothing probably.

This was a suburban black guy who want to a 'local white' party and was murdered. There is mostly circumstantial evidence, but no obvious hard clues in the episode.

a) At a party like that, police would have been aware of the party as it was happening, and would have been patrolling the roads around the party. If Alonzo Brooks were walking home, he would have been stopped by police within a few minutes of starting. Once he realized his friends were not there, he probably would have started walking on his own.

b) The fact that 40 FBI agents were initially assigned to the case points to officials having a concern that local law enforcers may have been involved and a coverup would be needed.

d) The posturing of the search crew as they were being interviewed is very suspicious. They are acting like a small gang that has learned 'the local rules' to win any conflict they are in. It's possible the producers of the show staged that, asked them to stand the way they were standing, but more likely it's a local clique of scummy law enforcement types who don't realize there are rules they don't control.

e) The person who did the body examination is unusually defensive. He is obviously competent, but if he has a history of skewing exams to favor police then it would point to the FBI exhumation as a federal attempt to head off any possible scandal touching them.

A person would have to look at each of the police officers working that night, and examine their paper trails, to know if they were involved. In 2004 it might have been awkward for a tv show to mention that police may have been involved in a murder, but there is no excuse for a show to leave that possibility out of their research in a 2020 show.

It's silly that still in 2020 a major news site would say "New autopsy report reveals 2004 death of Alonzo Brooks was a homicide." But it does show the bizarre lengths mainstream media will go to, still, to cover the tracks of police.

That deputy is actually from La Cygne, the tiny town where the party was, but there seems to be a pattern of tolerance for deputies in that county using their jobs for personal projects. Notice the sentence this deputy got, compared to what a non police officer would have gotten.

The vast majority of police misconduct is never publicized, so it is very hard to find out what happened if an officer was involved and the FBI is quietly covering up evidence in the Alonzo Brooks case. Something the FBI has been caught doing many, many times.

The shoes and hat near the house by the side of the road only shows that the killers were not too bright, and one of them probably told another to throw those items in that area. That might tend to point to a younger person being involved, or a slightly developmentally disabled person, or an overconfident person, a person with impunity.

This is another case that shows the cascading effects when police fakesolve a case.

The first police to respond decided immediately that it was a suicide then later police stood behind that mistake.

Was it a suicide?

One thing that is not mentioned in the show is simply that people with a lot of body fat float. A woman her size would need some rocks in her pockets to stay off the surface.

If she had committed suicide by jumping in the water, her body would have been found quickly.

Another thing not discussed was the weight disparity among members of her family. She and one of her daughters are in the top 5% of the population by weight. Another daughter is in the bottom 5%. At least two relatives have changed body mass significantly.

The fact that one of the suspects is a relative who is a narcotics cop should raise the possibility that amphetamines were involved in some way. The type of person she was would be most defensive about financial things, so a business issue involving amphetamines is possible. Amphetamines are often used for weight loss.

She had received malicious calls at her job, but there is no mention if somebody asked her employers permission to look at those phone records.

The show shows a piece of paper with the word 'toxicology', but does not discuss the report.

This looks like a common example of police hiding their mistakes.

At 1 hour 6 minutes 20 seconds there is drone footage of 'a fisherman in Southeast Asia writing a secret message to a drone'.

The person writes well in English, so he has some education. His skin is covered so his race isn't clear.

If the circumstances and the 'writing' are portrayed accurately in the documentary, there are no agencies in any country likely to help the fellow and his shipmates. He would be appealing to whoever was operating the drone and whichever private individuals saw the footage. In other words he is unlikely to receive any help.