"A deep skepticism about vaccine safety runs through Japan, fed by memories of forced vaccinations by U.S. forces after World War II"

In Japan, after WW2 the United States imposed some kind of mandatory vaccination policy on the Japanese. You will not easily find information about it on Google. Notice even Japanese media list all sort of reasons for Japanese distrust of vaccines, but politely do not mention the big reason.

Archetypes are basic structures of consciousness in the mind.

Just as a physical body has components e.g. arms, legs, etc, awareness in the mind also has structures.

After the word 'archetype' became popular in western scholarly jingoism

the word began to seep into popular books on how a person could understand all sorts of things by analyzing archetypes.

One of the most popular early authors after Jung was Pierre Daco, who wrote in French.

The word 'archetype' is usually defined in an academic way, referring to specific archetypes Jung defined. This website uses the word more loosely as any pattern that reliably repeats in a group of people, and distinguishes between

a) General human archetypes or Jungian style archetypes, and

While a Jungian archetype is 'complete in itself', in other words sustainable, melting pot archetypes are not.

One of the 'anthropological' themes of early studies of archetypes was the commonality of people i.e., 'everybody is the same, regardless ethnic, racial etc origin'.

Pursuing this theme, Jung generally stuck to archetypes that could be demonstrated or 'identified' or 'observed' across cultures, and he did actually do the work of cultural research necessary to show, to his satisfaction, that commonality.

Daco, and others, as much as their books are accurate and useful, extended these archetypes, but without doing the necessary research. In other words they expanded the supposed body of knowledge but the new territory may have been more local i.e., western rather than common human.

After Daco came a mob of further 'experts' that imagined all sorts of archetypes, many of them silly. This website's archetypes are along those lines but not entirely silly.

The archetypes listed in this section are not authoritative like Jung's, no great research is behind them, but they also try to avoid the complete silliness of the archetypes found in a lot of popular psych books.

a) what people would call 'Jungian' or common human i.e., 'indigenous' archetypes, as well as

b) melting pot archetypes, which are not common to all humans but which must have some archetypal root in indigenous minds.

A general understanding of what archetypes are is important in order to understand a lot of basic issues.

Here is one example from the news.

Vaccinations are used to give an artificial immunity to a disease. A vaccination involves a medical 'authority figure', usually a doctor or nurse, sticking the hollow metal tip of a syringe through a person's skin and injecting a substance that will confer some immunity.

a) The 'patient', who is undergoing an unpleasant experience based on the supposed knowledge of the doctor, and

b) The doctor or nurse, who is 'authorized' to administer this procedure.

In archetypal terms vaccination has no relation to any natural medicine or tradition. It's symbolism is overtly sexual, and in fact in any authoritarian medical environment it is common for injections to be used punitively.

The 'Nazis injecting prisoners' or Nazis performing other intrusive 'medical' acts, against the will of the patient, used to be a common theme in western society, including in books and movies.

In fact 'Nazis with syringes' used to be a sort of pre internet meme, but if you Google that phrase you will not find one photograph of a Nazi with a syringe. What you will find, strangely, near the top of the results is the photograph at the top of the following page.

Vaccination is a sort of hybrid between eugenics and medicine.

This isn't some hidden secret archetypal mystery, it's something so obvious that almost anybody recognizes it. And yet the common discussion on vaccinations ignores this in favor of elaborate subterfuge. 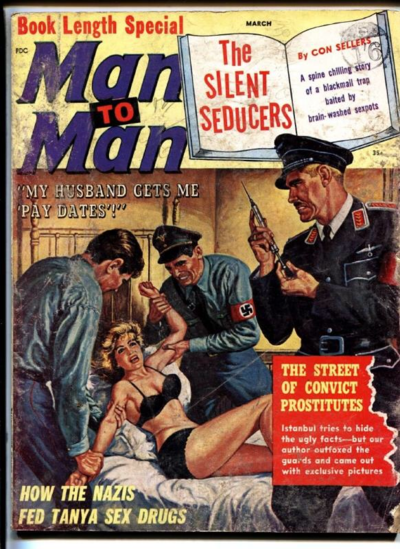 Here is a pro vaccination article in a major newspaper that complains about people who compare 'the right to not be forcefully vaccinated' with other basic civil rights.

Here is a major health website that lists all sorts of reasons people give for not supporting vaccines, but ignores the basic underlying issue of forced vaccination.

Here is the number two Google search result for 'anti vaxxer'. Aside from ignoring the main underlying reason for opposition to vaccines, it utterly fabricates a whole bunch of reasonings that the vast majority of people opposed to forced vaccinations would think are silly. The manipulative purpose of the article is to get impressionable people to decide whether they want to be 'a normal person' or 'a kooky conspiracy anti vaxxer'.

Unknown is what the effect of creating an artificial shortcut to immunity, via vaccine, might be.

More importantly, should an individual have the right to decide whether or not they or their children get vaccinated or should decisions like that be left to 'authorities'? Obviously it is a natural right to decline any intrusion by others, but should people have the political right to decline vaccination?

Vitamin B12 injections are sometimes given therapeutically to alcoholics. Years ago I worked in a place that had two kinds of B12 injections. There were a) optional B12 injections, which were available to anybody, and b) mandatory B12 injections which were provided by one nurse to clients who were unpleasant in some way. This was at a detox in a remote area, so a client who refused would have to walk several miles while detoxing. The point was not so much the benefit of the B12, though there was a benefit, the point was more to make sure any uncooperative people knew who had power.

As with the 'forcible rape' archetype underneath it, vaccination is a real part of the political landscape. Any society has to make political decisions about things like vaccination, human experimentation, exterminating undesireables, even issues like whether or not soldiers should be punished for rape. Rape helps win wars. Is it unpatriotic to oppose rape when your own soldiers do it?

Anybody can debate what the answer is, but the question should at least be framed accurately.