This page will try to guess at the meaning of the Voynich Manuscript.

1) The text looks like it was written by a person who was comfortable first in German and second in Italian.

2) The plants are obviously meant to be mostly aquatic species. They use a lot of incomplete grafting, which suggests the author had some contact with Asian culture, probably Chinese, or was a step or two removed from somebody with that contact. The plants also have obvious similarities in style to alchemical drawings, but more polluted or incomplete or confused than mainstream alchemists would use, which might be because the texts are describing some pathology.

3) the authors obsession with unbalanced symmetry in the drawings makes it likely that there is some distortion in the text, like mirror writing, as part of the coding.

4) Most of the early pages look like quotes that end in a person's name. Once one of these quotes is identified it could be a Rosetta Stone for the rest.

5) The fact that the manuscript may have been sold to a royal figure,

for a lot of money, suggests that the purpose of the encryption may have been to obscure the triviality of the document. In that case the document would have been such that the royal could share it, or would need to share it, with a person who was in his circle, but not for an expertise that might threaten to expose the ruse.

So far, it seems like the most productive path for a person who speaks Eastern European languages would be to start with the following links and look at related languages.

"In 1978, John Stojko published Letters to God's Eye, in which he claimed that the Voynich Manuscript was a series of letters written in vowelless Ukrainian. The theory caused some sensation among the Ukrainian diaspora at the time, and then in independent Ukraine after 1991. However, the date Stojko gives for the letters, the lack of relation between the text and the images, and the general looseness in the method of decryption have all been criticised."

6) Some speculation on the Wikipedia page involves something about the new world, and it's interesting that the plant to the right seems pretty clearly meant to portray a common group of edible tubers in the new world, but there may be similar plants elsewhere. 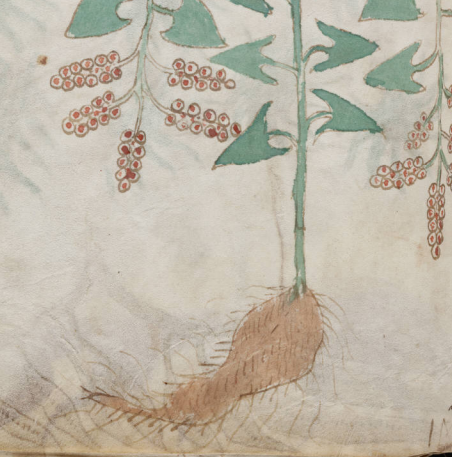 There are several new world plants which have arrow shaped leaves and edible roots, but as a general rule that type of plant signifies an edible root.