In 1980 some wealthy Texas brothers decided to corner the physical silver market.

Today there are literally thousands of individuals who have enough cash to push silver to us$100 overnight or gold to us$3000 within a few days.

It’s only a matter of time until one of them tries.

Every so often a small group of people will corner, or monopolize, something. Then they declare it as having more value than it really has, and they try to grow the number of people who support ‘their’ product so they can become nouveau super riche.

Here are the basic qualities of both gold and bitcoin.

2 Was roughly the 30th or 40th digital currency to exist, but the first with a well developed pumpndump architecture. Fewer than 10 digital currencies had reached the level of ‘thousands of users’ when bitcoin was started.

1 Does not do anything except create bitcoin. More of a virus than a currency. In other words, has no intrinsic value. Similar to fiat in that it has no practical uses by itself. Has forked > 50 times already, and there are a potentially unlimited number of bitcoin forks, clones, etc, not to mention other superior coins which are not bitcoin. Each fork can be considered ‘the original bitcoin’ because it actually is the original bitcoin. Anybody can make a ‘new and better’ bitcoin by copying it and adding features, just as was done with bitcoin which is simply an improved version of many earlier digital currencies.

2 Consumes a vast amount of energy, more than Austria https://digiconomist.net/bitcoin-energy-consumption/

3 Almost certainly has code vulnerabilities that have not been discovered yet. Anybody discovering a serious vulnerability can cause serious harm to an economy built around it. One early bitcoin hacker created more than a hundred billion bitcoin. https://hackernoon.com/bitcoins-biggest-hack-in-history-184-4-ded46310d4ef

As a current example, here is an article from October 2020 about a mining pool which is mining empty blocks, in other words ignoring transactions, and getting a lot of block rewards on some BTC forks https://news.bitcoin.com/hathor-merge-mining-pool-captures-33-of-the-bitcoin-cash-hashrate/

More than two months later, late December 2020, that mining pool now gets more blocks on some BTC forks than any other pool https://coin.dance/

The appearance is that either that pool is trying to benevolently raise awareness about a weakness in the code, or they have some longer term plan, whether positive or negative. The fact that the vulnerability has not been addressed in two months is stunning. BCH has about an eighth the number of nodes as BTC and about a fiftieth the hashrate. If a Brazilian coder can make a miner that ignores transactions on a multi billion dollar coin, and it goes unfixed for months, there are big storm clouds over crypto. But the fact that there has been almost no discussion about it is baffling. There have been less than ten posts in the last 20 days mentioning the issue on Twitter https://twitter.com/search?q=Hathormm&src=typed_query&f=live

That same mining pool gets almost 1% of all bitcoin blocks https://coin.dance/blocks The fact that this has been ignored for months is bizarre. Even stranger, is that bitcoin, with hundreds of billions of dollars, only has about 11,000 nodes, computers dedicated to maintaining the network and mining. But the really strange thing is that bitcoin and other coins make it optional for a miner to accept transactions. The developers are ‘trusting’ that miners will cooperate with that because of the fee incentive. If large miners suddenly decided to all mine empty blocks as some sort of protest, bitcoin or whichever coin would freeze until the protest ended. There are probably many other similar weaknesses which involve trusting miners and others to cooperate.

4 A lot of bitcoin is owned by hidden entities, such as ‘Satoshi Nakamoto’. Bitcoin was designed to give a lot of coins to those few people who mined early before the first halving. ‘Satoshi Nakamoto’ could have 500,000 to a million bitcoin and several other large early miners may have even more hidden i.e., spread over multiple wallets.

5 Learning how the digital economy evolves happens on a curve, as people figure things out. Large institutional investors piling into bitcoin are repeating the same step that many individuals did during the first and second wave of ‘altcoins’. As each of those institutional investors realizes the flaws in bitcoin they will dump it in favor of better coins. At some point simple fundamentals will matter to large investors, and at that point bitcoin will have no leg to stand on. Initially when that happens, bitcoin is likely to create bells and whistles, as bitcoin cash and other forks are doing with added functionalities, but fundamentals will eventually shift the coin economy to more fairly distributed and useful coins.

6 Since early in its history, part of the bitcoin story has been that it would gain practical usage as either a currency or a store of value, but it is suited for neither. Its block time is far too long to use as a currency, and ‘fixing’ that with secondary services that confirm transactions more quickly is like making a bicycle go fast by attaching it to a car. It adds unnecessary points of vulnerability and is silly. As a store of value, it has no inherent value, so how can it be used as a store of value? It would only work in a gang which can enforce it as a store of value. Nobody with any sense would choose ‘a thousand dollars worth of bitcoin’ over ‘a thousand dollars worth of x commodity e.g. gold, silver etc’ except for short term speculation. Bitcoin’s appeal is 100% speculation and 0% any practical use. It’s a big game of musical chairs and the goal of bitcoin speculators is to make money until enough people realize bitcoin is worthless, then quietly shift to a more sensible ‘store of value’. Bitcoin is the ultimate transnational Ponzi 2.0. Tulips on steroids.

7) Bitcoin can only be mined by fairly wealthy people, by global standards. In order to mine bitcoin profitably you need to use special hardware. The more hardware you can afford, the more bitcoin you can mine. If you cannot afford expensive hardware you have to buy bitcoin from the wealthier people who can afford mining equipment. In the beginning, when only fairly wealthy people knew about bitcoin, nobody was at a severe disadvantage. Now, though, there are millions of people in poorer countries who cannot afford to mine it so they are forced to deal with the wealthier people in their country or abroad who can mine it and sell it, at a premium, to them. Bitcoin supporters try to sanitize this https://cointelegraph.com/news/why-is-bitcoin-86k-in-nigeria-here-s-why-the-btc-premium-is-huge-in-some-countries Of course even when there is not a market premium there is always a miners premium. Miners make money mining at market price, but wealthy people in poor countries who sell to people who can't mine their own coins make much more.

1 Has many uses, and is one of only ~100 elements that exist, and one of only a dozen or so elements in the universe which can be used as ‘money’. No other stable elements can easily be created in any significant quantity for the foreseeable future.

2 Has always had strong psychological appeal as a metal that is roughly the color of the sun, or fire.

3 Has always had utility in developed economies as a currency, as well as industrial uses.

1 Mining is harmful to many areas.

2 Asteroid and ocean mining will eventually increase the supply.

1 As an investment, it is part of an asset class that is growing rapidly, that of industrial or practical substances. Already there are many other elements starting to be used as investments, https://www.kitco.com/strategic-metals/  and that category is likely to expand to compounds and mixtures which are scarce or expensive to produce and have use. None of these is ever likely to replace gold, but they will both a) compete with it for ‘value’ until a different popular mindset is produced by productive algorithm coins, and b) open up that asset class as more legitimate stores of value than non useful assets. At that latter point, the two main widely used asset classes are likely to be industrial substances like gold and ‘productive algorithm’ digital currencies which generate scientific data, and will replace non productive assets like bitcoin.

The heaviest elements are the only substances in existence which have the unique quality of being uncounterfeitable. Anything else can be counterfeited, but it is impossible to counterfeit the density, mass per unit of volume, of the heaviest metals. Gold can be mixed with tungsten of course, so it is 'counterfeitable' in a sense, but there is nothing that can be mixed with the heaviest elements except other heavy elements. If you buy an ounce of Osmium you can drop it in water and see how much water it displaces, and know if it is Osmium or not. https://www.nuclear-power.net/nuclear-engineering/thermodynamics/thermodynamic-properties/what-is-density-physics/densest-materials-on-the-earth/

Are there any indications that there might be more to bitcoin than meets the eye?

Japan was ‘thoroughly’ conquered in WWII, and the U.S. was not very sporting about its victory.

The Japanese economy has been basically built around the dollar, and built on top of a staggering amount of debt.

In the long run though, it looks like the Japanese are preparing for a victory.

The Japanese have clearly been preparing for the end of dollar dominance for a while. From the charts below it looks like the Euro was onboard up to around 2013, but changed plans or lost their stomach.

Was bitcoin a last ditch effort by the U.S. to create an escape for the dollar?

Or is it an attempt by a consortium of governments to transition to a digital economy from the crumbling fiat precipice?

The first chart below is Japanese Yen vs gold. The other three charts are gold vs Euro, Yuan and dollar.

Whether directly or indirectly, covertly or overtly, accidentally or deliberately, Japan has been buoying its economy long term with gold.

A skeptic could speculate that they sold gold on rises, but they are not a significant gold producing nation.

The mystery though is whether Japanese economists have found some ‘hidden order’ that indirectly balanced their economy, and whose footprint is the yen/gold chart.

Were they deliberately buying gold at strategic moments, or is their currency following their economic policies?

In the former case it looks like smart economics, but not otherwise impressive.

In the latter case it would be an amazing example of ‘some unknown’ economic or other policy being validated by a real market.

Either way, digital currencies now have a market cap over half a trillion dollars, and it will be disruptive when enough people realize they are not secure in their current form, and those masses start retreating back into gold.

~notice, 1) unlike other currencies, gold never retreats too much against the yen

3) China volume isn’t shown, but overall their chart is similar to the USD chart. Both countries with global ambitions and trying to fight commodities, i.e., trying to demonstrate that their currencies are better than natural currencies.

From the charts it looks like countries have been a) playing a massive game of using commodities on their ‘balance sheets’ i.e., buying massive quantities to trade and b) evening out the price in downturns by supporting countries that are too heavily into fiat, like Japan, and c) are now in a position where they may lose control because of low commodity prices at a time when they are forced to open money spigots due to Covid, economic slowing etc.

Bitcoin has given them some breathing room, money spent on bitcoin is money which is not spent pushing up commodity prices, but once a tipping point is reached there will be a mad dash for real commodities. 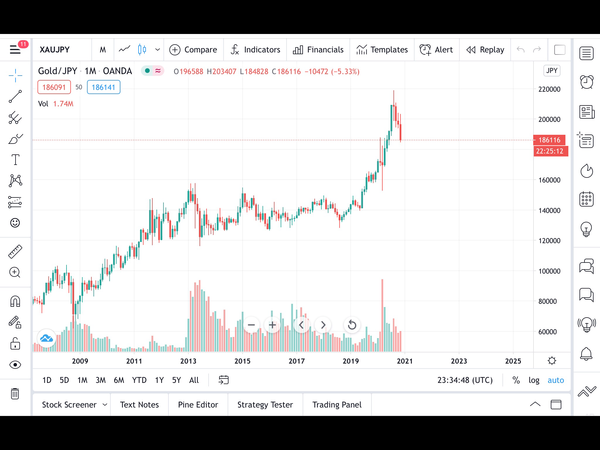 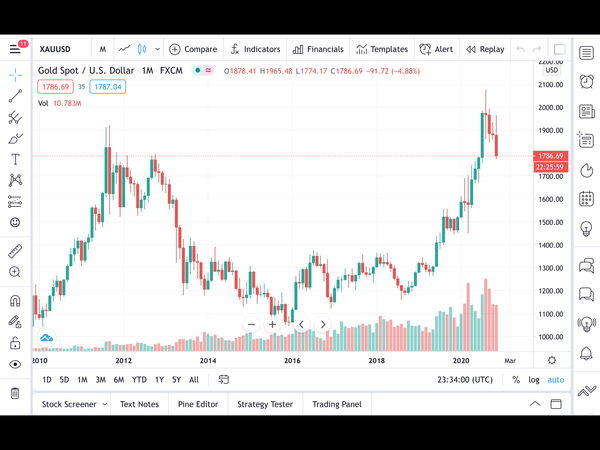 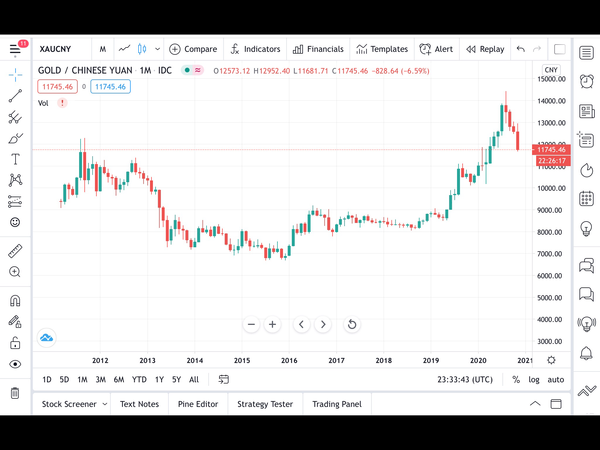 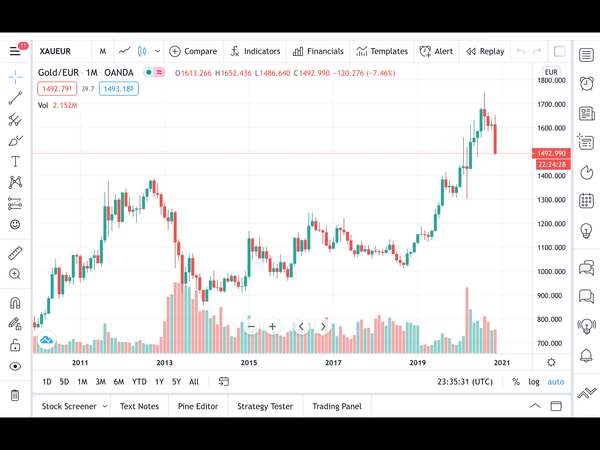