A border collie, Chaser was a reasonably educated animal, by U.S. standards.

As coin networks require more and more complex responses at some point in the future animals will be used to give responses that are 'different' than human responses but valid in some mathematical way.

Today's use of animals is entirely either political, one arbitrary group against another, or profiteering, some way to make money more easily using animals.

The most commonly known group uses for animals are K9 dogs that are often seen at airports, animals used by many militaries to do things humans can't or wouldn't do, and zoos. 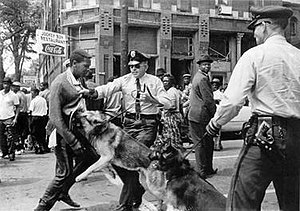 Most people have an inherent disrespect for the type of person who uses dogs to do things like find small amounts of drugs or catch nonviolent criminals, both still very common. But a generation or two ago there were many places that trained dogs to attack ethnic groups, and many people respected, or at least pretended to respect, those people.

Their dishonesty is evolving.

Regardless, considering the unusual things likely to be added to ai networks using animal labor, the dangerous side of ai could take quantum jumps until ai has firmer indigenous roots in society.

Worth distinguishing, in the case of 'dogs used to target black people', for example, the 'white cops' are not acting on specifically racial motives, and they are not defending a 'white indigenousness'. This important distinction is evident in the location and circumstances of their work. They are not taking dogs and traveling to a black indigenous area to defend themselves. Rather they brought the black people, by force, from an area that the black people were indigenous to, and are now using animals to force those blacks to surrender fully and assimilate.

The psychological fallacy or flaw is in pretending that the dogs represent a 'white indigenous nature' i.e., the dogs are just 'being dogs' and the police  are allowing the dogs to 'enforce natural laws'.

This kind of dishonest manipulation of the public psyche for political gains could spin out of control even further when ai develops in melting pot contexts, and the correction, nature's response, will benefit neither one side nor the other.

One of many stupid mistakes that are likely to be expensively made while ai is melting pot centered, but are unnecessary. Homogenous indigenous societies, to the extent they have been isolated, have a much firmer boundary between humans and animals and the political use of animals is not a part of their tool chest.

Are 'melting pot authorities' the best lead for artificial intelligence?

Earlier this year a cop shot a chihuahua that was barking at him.

And now an even worse incident. A cop was sent to check on a woman laying outside. She had a dog. He decided to shoot the dog and fired at it "as he retreated back". The dog survived but the shots killed the woman.

The point being these cops are trying to play their roles properly, and an essential component of their roles is stupidity.

Also important to know that hundreds of non cops have been sent to jail for long periods of time for similar mistakes, usually called manslaughter. In fact if a non cop had shot the woman under the exact same circumstances he or she would have been arrested immediately and people would be clucking online about idiots with guns. The cop is not likely to face any 'punishment' whatsoever. The only thing unusual about this incident is that the media reported it.

A few of the non cops sent to prison recently for accidental shootings. Some of these involve less culpability than the cop who shot the woman as he was trying to shoot her dog.

A more extreme case along the same lines.

Cops had brought a tv film crew along on an arrest raid, so the public could see their "heroism".

As the raid started one of the police officers accidentally shot a small girl, killing her. The first thing police did was tell the media that the girl's grandmother had grabbed the cops gun and shot the girl.

"...made his way to his sergeant and reported what had just happened. A woman inside grabbed my gun, Weekley said, according to police sources. It fired. The bullet hit a child."

That fiction was eventually uncovered, but the rest of the case has other problems.

Was that cop even fired? The cop and his buddies took a while to straighten their fictional stories, and he enjoyed a paid break from work, but he's still a cop. When he shifted from paid break to paid work again he initially wasn't available for comment because he was on paid vacation.

There have been cases where cops were jailed for killing children.

One of those two received a lengthy sentence, the other was the son of the assistant district attorney so he got a shorter sentence and was released recently.