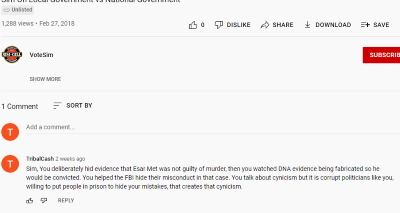 There are a lot of individuals whose misconduct in this case is well documented. Prosecutors, police, FBI agents, defense attorneys, reporters.

One that stands out though, for the extensive easy documentation of criminal professional misconduct is the medical examiner who testified at the trial. He said a lot of things that are easily discredited by anybody with any knowledge of basic physiology.

Is his misbehavior unusual?

An interesting articles in the NYT. Some excerpted paragraphs, in order, but with a lot skipped to avoid copyright problems.

"Emberly McLean-Bernard, born six weeks premature in rural Mississippi, weighed less than five pounds when doctors sent her home. She did not cry and barely ate, her mother said, and not two days elapsed before she began to gasp for breath. Jocelyn McLean rushed her daughter to the nearest emergency room, but the baby was already turning blue."

"A state medical examiner concluded that the death had not occurred because of a medical problem, but had been a homicide, the result of “blunt force injuries with signs of strangulation.”"

"Ms. McLean, a 29-year-old Black mother with two other small children, was charged with capital murder."

"Ms. McLean was stunned. The emergency room doctor who had tried to save the baby was shocked. But Dr. Joye Carter, a forensic pathologist tapped by the defense to review the case, saw an all-too-familiar pattern: a medical examiner who made a ruling without talking to the doctor or even examining the hospital records. Supervisors who signed off on his decision. A criminal justice system that all too often sends Black people to prison on evidence that might not have convicted someone else. In court, Ms. McLean and her lawyer recalled, Ms. McLean was called a “monster.”"

"She spent more than a year in jail before Dr. Carter’s autopsy review forced the state medical examiner and prosecutor to acknowledge that the baby’s injuries could be explained by the desperate attempts to save her that night."

"The nation’s death investigation system, a patchwork of medical examiners, freelance experts and elected coroners who may have no medical training, is responsible for examining suspicious and unexplained deaths. Wrapped in a mantle of scientific authority, its practitioners translate the complexities of disease, decomposition, toxicology and physics into simple categories like accident, homicide or death by natural causes, setting in motion the legal system’s gravest cases and wielding tremendous influence over juries."

"Yet these experts are far from infallible. As forensic science of all kinds faces scrutiny about its reliability, with blood splatter patterns, hair matching and even fingerprints no longer regarded as the irrefutable evidence they once were, the science of death has been roiled over the past year with questions about whether the work of medical examiners is affected by racial bias, preconceived expectations and the powerful influence of law enforcement."

"A study published last year by the Journal of Forensic Sciences found evidence of cognitive bias when 133 forensic scientists were presented with identical medical evidence in hypothetical cases involving child deaths. The deaths were more likely to be ruled an accident if the child was white and the caregiver was a grandmother; they were more frequently ruled a homicide when the child was Black and being cared for by the mother’s boyfriend."

"The new research was met by an explosive backlash. The National Association of Medical Examiners complained that the study had been poorly designed and improperly conducted. One association member filed an ethics complaint against Dr. Carter and the three other forensic pathologists listed as authors, claiming that the paper would do “incalculable damage to our profession.”"

"Dan Simon, a professor of law and psychology who served for six years on the federal committee charged with creating better forensic standards, said medical examiners have been uniquely resistant to adopting reforms. “They stand out in their recalcitrance,” he said. “And it’s a serious problem.”"

"In one California case, Vicente Benavides spent 25 years on death row on charges of raping and sodomizing his girlfriend’s 21-month-old daughter so brutally that it killed her. Mr. Benavides was released in 2018 after experts said the cause of death presented at trial was anatomically impossible."

"A string of poor Black women were turning up dead in dismal settings — cheap hotels, abandoned buildings, open fields. Though the women were found in similar poses, the deputy medical examiner believed their deaths had been triggered by a combination of cocaine use and voluntary sex. Nearly all were classified as drug-induced accidents."

"Dr. Carter pushed back. The victim she examined had a severe crack habit, but Dr. Carter declined to call the death an accident."

"She was right — after a public outcry, the autopsies were reviewed; injuries were found that had been overlooked or dismissed, and the deaths were all reclassified as homicides. A man with prior rape convictions became the prime suspect in 32 killings over nearly a decade. He died before he could be brought to trial."