The Suicide Bomber is a very clear part of a Jungian archetype, and is an important point of confusion in melting pots. 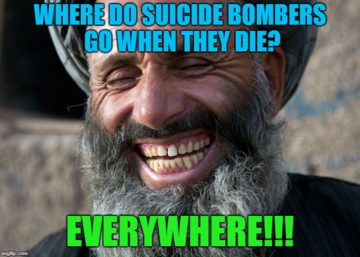 A well developed person is willing to both kill and die for some core value, and the extent to which what they will kill for and what they will die for is the same is a good indicator of how civilized they are.

An example is the Boyd Massacre In 1809 New Zealand.

"The Boyd massacre occurred in December 1809 when Māori residents of Whangaroa Harbour in northern New Zealand killed and ate between 66 and 70 Europeans."

At first glance, by the first paragraph of that Wikipedia page, Maori were willing to kill for the sake of eating meat, but a person can guess that they probably were not willing to die for that same purpose. Therefore that would be an indicator of their lack of civilized development.

But getting a little more information, reading further, the killings were actually a matter of Maori justice for abuse of a chief's son. Since the Maori were probably equally willing to kill or die for that value when it is articulated accurately, they actually come out as civilized.

Whether the actions by the white captain, whipping the chief's son, were justified became moot once they were on Maori land.

An intermediate example, part way between indigenous and melting pot, is the young guy who drove into some random bicyclers for his political motives.

Note that he is defending, and willing to sacrifice his interests for, what he perceives as 'his clan', in other words he has partially transferred tribal motives to his religious melting pot, but his adversaries, the 'prosecutors', are even further from sound footing and perceive him to be acting out if some ignorance, which they feel they must protect him from, as per their employment roles.

One absurd irony that ends up compounding into a wealth of absurdities.

One of the best examples of an archetypal melting pot Suicide bomber is the Las Vegas shooter.

There is a difference between a genuine archetypal 'suicide bomber' and the mass shooters listed on  https://www.anycoin.exchange/blog/indigenous-archetypes/knights-mass-shooters.html

In his 'manifesto', Brenton Tarrant says "Australia is a European colony, particularly of British stock and thereby an extension of Europe."

So his reasoning seems to be that defending possession of a colony, or defending property, is worth certain death for 'the greater good'.

That argument clearly does not stand on its own, so it has to be bolstered by an argument that he is defending his race, which, if accurate, would be an adequate reflection of a natural and deep part of the psyche, the archetypal suicide bomber.

But the race part fails on simple logic. Australia and New Zealand are colonies, not indigenous white areas. Should Africans and Asians go to Europe and be willing to die to defend African or Asian 'racial power' there? It makes no sense.

His argument boils down to "We white people have taken Australia and New Zealand from their previous inhabitants and must now be willing to die to prevent future non white inhabitants from diluting our power in these places we have taken".

There was a time in history when his logic would have worked as long as the previous inhabitants had been exterminated, but there are still Native Australians and Maoris that exist and whose natural rights in those places supersedes the rights of other groups who came to colonize or start businesses or whatever.

So Tarrant and the other mass shooters may have very good motives, and a person has to respect that they are willing to do something like that on their own initiative, but ultimately their motives do not reflect a heroic or legendary 'archetypal suicide bomber' as much as simply young males overdosing on testosterone or hungry for Adrenalin.

The archetypal Suicide Bomber, the individual, acting instinctively, who approaches some 'dangerous' enemy with the knowledge both may die, physically or metaphorically, is a basic, but highly refined structure in the minds of indigenous people, even if it has been repressed in the melting potter. In fact it is one of the common signatures that differentiate indigenous and melting pot individuals.

An indigenous person will go to their death, when appropriate, with little concern and no hesitation, instinctively.

The melting pot person will eagerly send others to do that but generally does not agree to a 100% fatal scenario, no matter how immediately vital, unless they are part of a group where the appearance, the pretense, of that kind of sacrifice compensates for some deficiency in the individuals of that group, and they are very thoroughly indoctrinated with some short term nonsense.

In other words melting potters are 'trained' to imitate a motive that is tribal, because that motive selects for the success of the group. Melting pots which encourage this pretense will usually beat melting pits which don't in military conflicts.

A further irony is that melting potters can be induced to transfer the 'genuine sacrifice' for tribal, i.e., familial interests, onto the melting pot, but that sacrifice then weakens the familial or 'tribal' interest that made it,

Ultimately it is a game of musical chairs, trying to induce others to 'sacrifice' for 'the group' until fewer and fewer groups remain.

When a melting potter has what seems to be this attribute, it invariably is muddied with complexity, it is never 'a simple fact', as it is with primitive people.

This is evidenced further by melting potters who cultivate a detached persona towards situations where this archetypal feature might be expected to show itself. Melting potters, in some cases, master the 'role' of a suicide bomber, but not the reality. The education required to exist in a melting pot prevents the instinct required to live outside it.

An example is evident in this interview with Richard Kuklinski, a U.S. serial killer.

He is trying to cultivate the persona of the 'U.S. cop' or 'U.S. military type', the stereotypical melting pot person 'bravely killing or dying for some imaginary group or contrived value'. Like the U.S. cop or soldier, his actual persona is a thin veneer of 'character' used to hide some opportunistic pettiness. In his case he was generally paid a lot of money to kill people. His persona was credible when his only footprint was the bodies he left, but examining his actual mannerisms and thinking makes it clear he is as much a fraud as the police and soldiers he tries to imitate.

Jung included the elements of this archetype in the "Self" archetype for the reason that in the melting pot it is a necessary step towards individuation or wholeness. He also articulated and supported, in great depth with historical references, the relationship between what some people call the 'jesus' archetype, a variation of Jung's "Self" and, for example, alchemical references. The point being that for thousands of years there has been a melting pot tendency to modify / synthesize some variation of the Suicide Bomber that is not a threat to the melting pot.

Unfortunately, taking the Suicide Bomber out of the individual is not sustainable, it does not create a creature that is surviveable. Training people to idealize, for example, jesus, as an archetypal hero that sacrifices his life for others necessarily trains them to survive only in the melting pot bubble.

A conquered territory is best reconquered by a melting pot, but a new territory can only be developed by a group that has created a unified wholistic society on its own. The current melting pots might be ready to properly explore new space in thousands of years, but any isolated indigenous society is already there.

An interesting example of an aspiring melting pot Suicide Bomber.

A man, pretending to be a woman, who has mastered one aspect of exploiting some vulnerability in his target, but sacrificed everything else.

Compared to the 'suicide bombers' cultivated, for example, by more conventional parts of society, this person has come a lot closer to the actual archetype.

His flaw, what prevented success, was the basic flaw that is always 'cultivated' in the melting pot, a disrespect for nature, a feeling that the individual guides nature.